Lateral Sole Wedge Inserts for Osteoarthritis of the Medial Compartment of the Knee -Wednesday, June 7, 2017

Can a Lateral Sole Wedge Insert be worn with a Prescription Orthotic? Lateral Sole Wedge Inserts are used and recommended to limit supination of the foot. Excessive supination leads to biomechanical overload of the medial knee making patients prone to early-onset osteoarthritis of the knee. By lim... 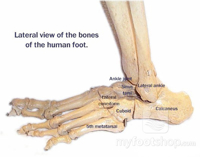 What is metatarsalgia and how is it treated with canting? -Friday, January 27, 2017

Metatarsalgia | Can you or can’t you cant? Cross-country skiing requires form that is centered over the ski with virtually no reliance on your bindings. Alpine and Rondonee bindings differ in that they are rigidly fixed to the ski (Alpine) or semi-rigidly/rigidly tethered as found in Rondonee bindings. The beauty of a cross country set-up is the simplicity of a toe clip. But that simplicity also means that the act of cross-country skiing requires a very calculated, centered load bearing and swing phase to keep the skis in alignment.