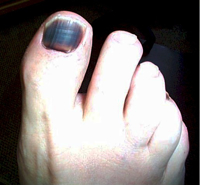 Runner's Nail | How do I treat it?

What's the best way to treat runner's nail? Black toe nail, called runner's nail (also walker's nail) is best treated when the bruise under the nail is drained promptly following injury. That's why the Naileezer Nail Drill is to tool of choice.

I bruised my toe nail - how do I treat it? How to treat runner's nail.

Runner's nail is a common diagnosis that occurs following an injury to the toe nail.  Runner's nail is often the result of running downhill in a loose shoe.  I also see runner's nail occur when a runner is focused on completing an activity, such as the end of a race.  As the foot pistons forward in a loose shoe, the nail repetitively hits against the toe box causing a bruise beneath the nail.  This bruise is called a subungual hematoma, or what we commonly call runner's nail.

Do you need to be a runner to have runner's nail?  Absolutely not.  I see runner's nail in walkers and hikers, and in active sports like soccer and football. The black discoloration of runner's nail is no more than a localized bruise.  But that bruise can do some serious damage to the nail.  The bruise tends to float the nail off of the underlying nail bed.  This separation of the nail leads to eventual loss of the nail.

To use the Naileezer Nail Drill simply set the adjustable depth guide and slowly drill in a clockwise direction.

Once the bruise has been drained, try to keep the nail in place as long as possible.  The potential loss of the nail is dependent upon the size of the bruise beneath the nail and the duration of the bruise.  The earlier you drain the bruise, the better your chances of keeping the nail.

The CurveCorrect Ingrown Toenail Treatment Kit is the safe, non-surgical, over-the-counter way to relieve pain and treat ingrown toenails at home using thin correction strips. Each kit includes everything you need to fix ingrown toenails. By CurveCorrect. 1 kit has 10 applications/pkg.
As low as $38.21!

ClearZal Nail Care Solution is a topical solution for infected nails that kills bacteria and fungus on contact. Use twice daily for safe and effective treatment of your thick or discolored nails. By ClearZal. 1 fluid oz. 1 bottle/pkg.
As low as $15.26!

Small Nail Cutters, also known as nail nippers, are the professional choice among pedicure tools and nail care instruments for smaller hands to easily trim thick, tough toenails. Made of quality, polished stainless steel, these podiatrist approved, medical-grade clippers are perfect for ingrown toenails. By Myfootshop.com. 1/pkg.
As low as $9.31!

The Large Nail Cutter is the professional, podiatrist-approved, medical-grade choice for trimming thick, hard, fungal toenails. These heavy-duty clippers are made of polished stainless steel. By Myfootshop.com. 1/pkg.
As low as $11.01!