Peripheral arterial disease (PAD) refers to limited arterial blood flow to the feet or hands. Peripheral arterial disease affects over 8 million Americans. The prevalence of PAD is known to increase with age and affects more than 25% of those over the age of 80 years old. Advanced PAD results in ischemic rest pain, non-healing wounds, and gangrene. PAD effects men more frequently than women. The onset of PAD is typically 50-80 years of age. Advanced PAD is called critical limb ischemia.

Capillary refill time, the time it takes for a toe to "pink up" after being held, becomes delayed greater than 5 seconds in cases of PAD. Pallor (whiteness) on elevation and rubor (redness) on dependency are classic findings of PAD.

Diagnosis of peripheral arterial disease begins with a history and physical exam. Painful cramps at night are one of the most common symptoms of PAD. Another finding of PAD would include an inability to walk distances due to pain or heaviness in the legs. Patients with advanced peripheral arterial disease find it difficult to raise their feet to sit in a recliner chair or lay in bed. With compromised arterial flow, blood has a difficult time ascending the leg. Therefore, many patients with PAD will sleep with their foot hanging off the edge of the bed.

Vascular testing for PAD is initially performed by office-based Doppler exams. Doppler exams are helpful in two respects.  Doppler exams used for PAD can both quantify and qualify peripheral arterial flow. To quantify peripheral arterial flow, lower extremity measurements are compared to blood pressure readings of the arm. This comparison is called an ankle brachial index, or ABI. ABI testing is crucial to determining the ability of a foot wound to heal. Doppler exams can also be used to qualify vascular testing. The waveform generated during the Doppler exam can describe the degree of elasticity vs calcification (hardening) of the artery. If ABI testing shows a significant decrease in arterial flow, hospital-based x-ray studies using dye, called an arteriogram, are used to determine the exact location of arterial blockage of the leg. Additional testing used to evaluate PAD includes skin perfusion pressure and transcutaneus oxygen pressure.

The vast majority of peripheral arterial disease is caused by arteriosclerosis obliterans (ASO), a progressive occlusive disease of the arteries. ASO is believed to begin by the formation of a fatty streak in the artery called atherosclerosis. These fatty streaks localize in the wall of the blood vessel and harden over time, forming ASO. Complete occlusion of the artery results in disruption of blood flow to the target organ. Males are more predisposed to ASO and are subsequently more inclined to develop wound healing problems associated with PAD. Other factors that contribute to non-healing wounds include mechanical stress, lipid disorders, and high blood pressure. Tobacco use, whether smoking, snuff or chew, is a significant contributing factor. Circulating levels of nicotine make the blood more acidic. As a result, nicotine makes the artery wall much more permeable to atherosclerotic plaque, increasing the likelihood of ASO.

The differential diagnosis for PAD should include:

Treatment of peripheral arterial disease often requires a combination of medical and surgical care. Patients who are smokers will benefit greatly from smoking cessation. Lowering levels of circulating lipids with statin drugs is also imperative. Blood pressure must be carefully regulated to prevent hardening of arteries. Increased exercise may contribute to collateral circulation and may improve blood flow to ischemic limbs.

Arterial bypass surgery, developed during the 1970's, is still a common surgical method used today but may only be used on the medium to large vessels of the leg. Until recently, revascularization was limited to bypass grafting with harvested grafts or synthetic grafts. During the past twenty years, there have been significant advances in endovascular techniques used to revascularize the leg and foot. Endovascular techniques focus on clearing the blockage of the leg by using balloons to compress plaque or devices to ream plaque, re-opening occluded vessels. There is an ongoing controversy among both physicians who perform these procedures and insurance companies who pay for these services as to which procedure (open vascular bypass or endovascular angioplasty) has the best long-term success rate. Although the debate is ongoing, there is a clear consensus that endovascular procedures are indicated for patients who are considered high-risk due to co-morbidities such as advanced age, diabetes or advanced heart disease.

Wound care is an important aspect of PAD treatment. Treatment of wounds with serial debridement of devitalized tissue is imperative.  Treatment of infection any be necessary with antibiotics, whether topical, oral or IV. Protection (off-loading) of the wound is essential. Many devices have been invented for this purpose to act as a cradle or pad for the wound. Many physicians use adjunctive wound therapies such as topical enzymes for wound debridement or wound growth factors to enhance wound healing. Hyperbaric oxygen therapy (HBOT) is also used to treat wounds due to PAD.

Unfortunately, amputation is still all too common for advanced cases of peripheral arterial disease. The level of amputation is dictated by

vascular testing that includes Doppler exam and arteriogram. The post-operative success of amputation depends to a great extent upon the patient's functional capacity going into their surgery.  Patients greater than 70 years old have a three-fold higher risk of death from amputation surgery when compared to a patient 20 years younger. Older patients are also less likely to use prosthetics post amputation and are 4 times more inclined to lose their independent living status post amputation when compared to similar patients age 50 years old or less. These outcome statistics remain the same regardless of surgical method used (open vs endovascular.)

Symptoms of peripheral arterial disease should always be evaluated by your podiatrist or primary care doctor. 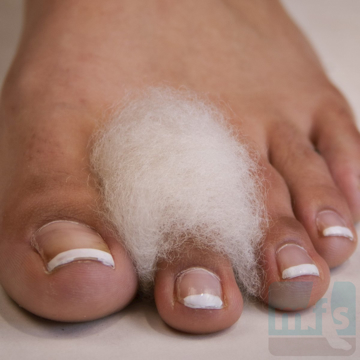 Lambs Wool Padding is a classic treatment for a wide range of toe problems, including corns on the toes, hammer toes, fractured toes, and sweaty feet. Lambs wool is your 100% natural solution for treating toe issues, sourced from our own flock of sheep! By Myfootshop.com. ¾ oz./pkg.
As low as $5.65! 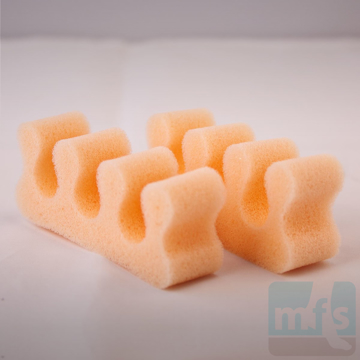 Toe Cushions are made of soft foam and worn comfortably between the toes to help align and separate overlapping toes, relieve pressure on sore corns and calluses, and reduce friction between toes. By Myfootshop.com. 2/pkg.
As low as $3.75!