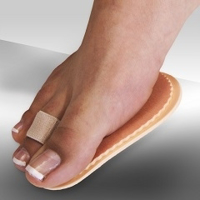 Why does a second toe overlap a bunion? This common complication is explained in this post.

Great video, right?  But why would this ever happen?  Why would the second toe ride up and over the great toe?  It all starts with a person's genetic predisposition to form a bunion.

Bunions aren't inherited per se, but people do inherit the same biomechanical set of bones and joints that their parents and grandparents have.  And if there's a tendency for a family to have bunions, we tend to see that biomechanical trait passed down through the family.

Bunion - what causes a bunion?

This video shows the early stages of the progressive deviation of the toes.  In this case, the changes of the great toe and the second toe are flexible and return to their normal positions when done moving.  Progressively though, over time these flexible deformities will become rigid and fixed with the great toe permanently residing under the second toe.

For more information, be sure to check out our knowledge base page on bunions and hammer toes.

Leave your comment
Comments
Rita
11/28/2018 1:05 PM
I've had bunion surgery and am now wondering if I need to continue to use bunion products?
Dr. Jeffrey

11/29/2018 5:31 PM
Hi Rita,<br>
It's often a challenge to obtain perfect alignment of the great toe during bunion surgery.  Your surgeon will err to the side of under correction ( great toe resting against the second toe).  And in that immediate post op period, to obtain and maintain alignment, I'll often use a <a href="/gel-bunion-spacer-1-1">Gel Bunion Spacer</a> or <a href="/gel-bunion-spacer-with-stay-put-loop">Gel Bunion Spacer with Stay-Put Loop</a> to hold the great toe in the corrected position for up to 3 months following surgery.   It's as if the great toe has a bit of memory and want to return to it's previous position.  The use of the Bunion Separator will help to make the memory go away.<br>
Long term following bunion surgery, the use of pads really shouldn't be necessary.  That's the goal of the surgery - to eliminate using the pads.<br>
Hope this helps.<br>
<a href="/jeffrey_a_oster_dpm_cv">Jeffrey A. Oster, DPM</a><br>
Medical Director<br>
Myfootshop.com
Blog search
Categories
Blog archive
Popular blog tags