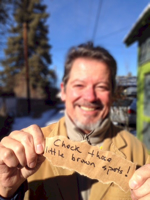 Bob Marley said, "Money can't buy life." He was referring to his diagnosis of malignant melanoma, that ended his life at 36 years of age. This article discusses malignant melanoma and the need to 'check those little brown spots.

Check those little brown spots - it might just save your life.

Bob Marley was one of the greats. An innovator and artist, Bob died in 1981 from malignant melanoma.  The diagnosis of acral lentiginous melanoma came in 1977 from a biopsy of Bob's great toe nail. Recommended treatment was amputation of the toe, which he refused. While on tour in the spring of '81, Bob's condition became much worse, forcing him to stop his tour and be hospitalized in Miami. He died on May 11, 1981 in Miami as a result of metastasis of malignant melanoma to his brain and lungs.

Had Bob treated his cancer from the start, we'd still be hearing new Marley songs today, but he didn't. Bob's life ended at 36 years of age. His last words to his son Ziggy were "money can't buy life."

Brown spots on the feet? Dark stripes in the nails? Have those brown spots screened by your podiatrist or dermatologist. Money really can buy life if you act prudently and take charge of your health.

Natural Healing Foot Cream is made with all-natural ingredients, including tee tree oil and lavender oil, to soothe and moisturize dry, peeling, cracked feet and heal infections the natural way! Also great for treating athlete’s foot and diaper rash. One 4oz.jar/pkg. By Myfootshop.com
As low as $11.01!