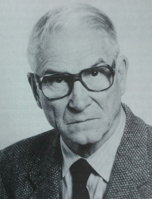 Cast Disease – is it still an issue?

How has internal fixation changed our thinking about cast disease?

As a resident in 1983, I had the honor to meet one of the founders of the science of internal fixation, Hans Willenegger (image right).  Dr. Willenengger, along with several other doctors had formed a study group in Davos, Switzerland called the AO Foundation (Arbeitsgemeinschaft für Osteosynthesefragen).  The AO Foundation established the founding principles for internal bone fixation.

I was a young, naive foot and ankle surgeon and Dr. Wilennegger was a seasoned surgeon who trained in wartime as a surgeon for the German army in WWII.  He kindly and passionately described to me something that I’ll never forget.

“As the Allied forces advanced, our field hospital and our patients were forced to evacuate.  Fortunately, I had the opportunity to watch these men heal over weeks to months.  What struck me was the fact that for those soldiers with orthopedic injuries, when forced to ambulate, they healed much faster than if they were allowed to rest.  There was something important in early weight-bearing and early return to activity.”

What Dr. Wilennegger described was cast disease – the problems that arise as a result of inactivity and non-weight bearing.  Internal fixation, and now external fixation techniques, allowed patients to return to early ambulation.  The core principles of the AO group stressed early return to weight-bearing.

So have we put to rest the problems of cast disease?  Is cast disease a thing of the past?  Unfortunately not.  The point of this post is to honor that fundamental principal of the AO group – early return to weight-bearing.  I see all too often treatment that is based on just the opposite; place the patient in a cast and see them in 8 weeks.   I think that defeats some of the best medical science of the 20th century.  Early weight bearing requires a well-defined treatment plan.  Early weight bearing requires coordination with ancillary services like physical therapy and occupational therapy.  And it requires a carefully defined treatment plan with frequent monitoring of patient status.  In these days of rapid room turn over, I can’t help but honor the legacy of Dr. Wilennegger and his push to individualize care and push for early ambulation.

Is cast disease a thing of the past?  Unfortunately not.  But keeping the spirit of Hans Wilennegger alive and well may help.  Internal fixation, early ambulation, and individualized care – that’s the cure for cast disease.

The Shower-Right Cast and Bandage Protector offers a simple, re-usable solution to showering with a cast or bandage after an injury or surgery. Fits casts and bandages of all sizes. Only available at Myfootshop.com. One size. Universal right/left. Latex free. 1/pkg.
As low as $10.16!

The High Top Pneumatic Walking Cast's boot design increases stability and decreases pain and swelling while recovering from foot or ankle injuries. Used in the treatment of foot and ankle sprains, fractures, and post-surgery recovery. By Myfootshop.com. Universal right/left.
As low as $56.06!

The Low Top Pneumatic Walking Cast has a lightweight, mid-calf boot design that is a great solution for minor foot and ankle injuries including fractures of the foot and ankle sprains. Re-usable and easy to use. By Myfootshop.com. Universal left/right.
As low as $64.56!
Leave your comment
Blog search
Categories
Blog archive
Popular blog tags