Free shipping on orders over $70*

Previous Post Diabetic Peripheral Neuropathy - patient examination guidelines for practitioners (part 2) Next Post Metatarsal Pads – which one is best for my foot pain?

What are the criteria for long term success of orthopedic implants and why is the Cartiva® Implant designed for failure?

Compatibility between human tissue (bone, cartilage, ligament, tendon, and fascia) and orthopedic implants requires a number of criteria for success.  Rahyussalim, et al, in their 2016 paper entitled ‘The Needs of Current Technology in Orthopedic Prosthesis Biomaterials Application to Reduce Implant Failure Rate’, describes what they call biomaterials (implants) and the paper focuses on metallic implants. (1)  The paper is a thorough review of implant-host compatibility issues that include (2,3):

Cartiva, Inc. is a medical device company based in Alpharetta, Ga.  Cartiva, Inc. gained FDA premarket approval for Cartiva SCI (surgical cartilage implant) in 2016 with specific indications for treatment of stage four hallux limitus, also known as hallux rigidus.  Cartiva, Inc. sold their Cartiva SCI to Wright Medical Inc in a deal valued at $435 million which closed in the final quarter of 2018.

Cartiva, Inc. has provided the medical community with volumes of literature regarding Cartiva SCI through peer-reviewed journal articles and the MOTION study, a study of 197 patients at twelve centers.  Take a few minutes to review the literature and I think you'll be impressed.  I was until I started using Cartiva® Implants.

I’m a board-certified, hospital-based podiatrist with 33 years of practice experience.  It takes a lot to get an old dog to change but after speaking with peers at seminars, I was convinced to switch from my old reliable Swanson Double Stem Great Toe Implant to the Cartiva implant.  The benefit was that the Cartiva® Implant was quicker to perform, less invasive and left a back door in case of a problem.  For instance, in the case of an infected implant, a revision to fusion post-Cartiva ® Implant would be much easier than if I had used a Swanson implant.  OK, made sense to me.

How many of my cases still need revision?  My project for the summer is to do that follow-up.

Ben is a healthy 63 y/o male who recently retired from his teaching job.  Ben is active but is limited by bilateral hallux rigidus.  In his transition to retirement, his goal was to correct his hallux rigidus and do a lot of hiking and biking.  When he heard about Cartiva® Implants he was eager to proceed with the procedure under the assumption that he would gain an early return to activity.  We scheduled his first Cartiva® surgery in October of 2018.  Within 6 weeks he was fully active and requesting the other foot be treated with a Cartiva® Implant as soon as we could schedule it.  His second foot was completed in December of that same year.

Following discharge from my practice, he returned 3 months later complaining of pain just like he had prior to surgery.  X-rays taken the date of surgery were compared to 5-month post-surgery films that showed a stark contrast in the joint space.  It was apparent that the implant had impacted.

Last month we did a revision of both great toe joints with a Swanson double stem implant.  It’s early in his course of treatment since his final surgery, but he’s doing well.

The x-ray images below show Ben’s progress from before surgery through revision surgery.  Pay careful attention to the difference in joint space in the second and third images.  In the second image, the Cartiva® Implant is well positioned and is functioning well, creating adequate joint space and a pain-free joint.  In the third image, the Cartiva® Implant has impacted and we are back to bone on bone with the painful symptoms of hallux rigidus.  The fourth image shows revision of the procedure with a Swanson Implant. 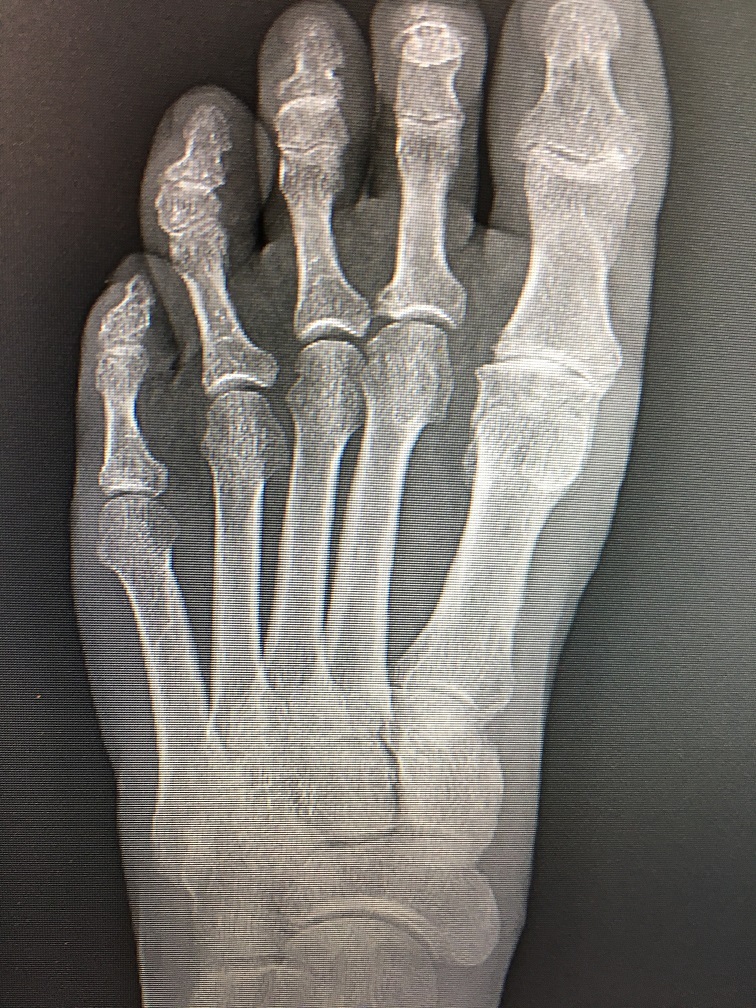 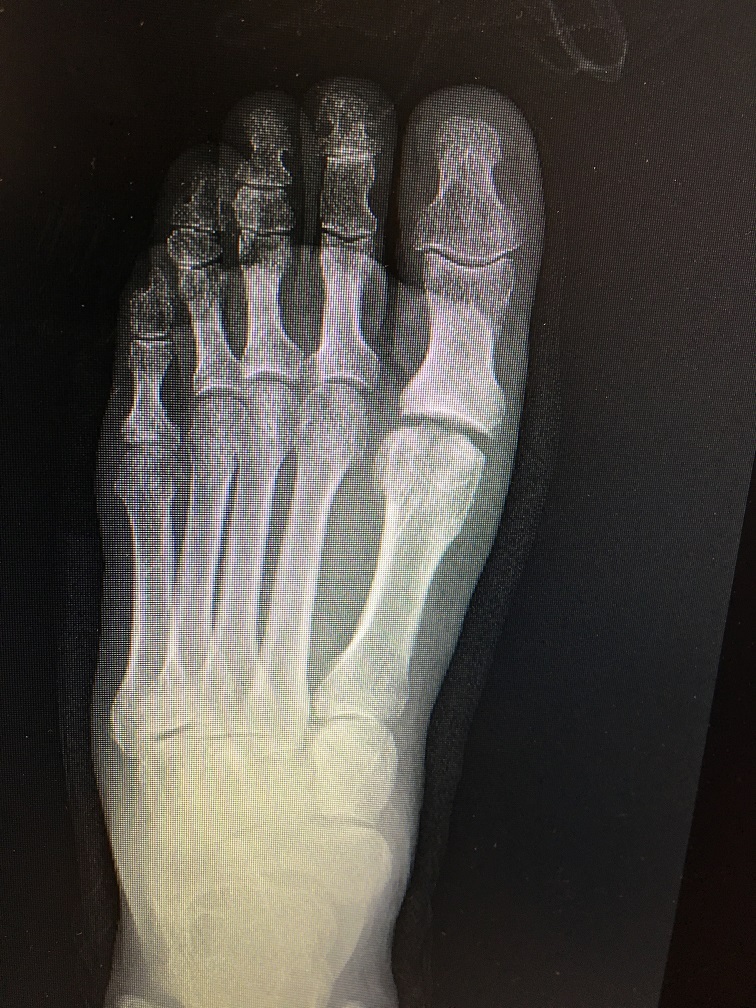 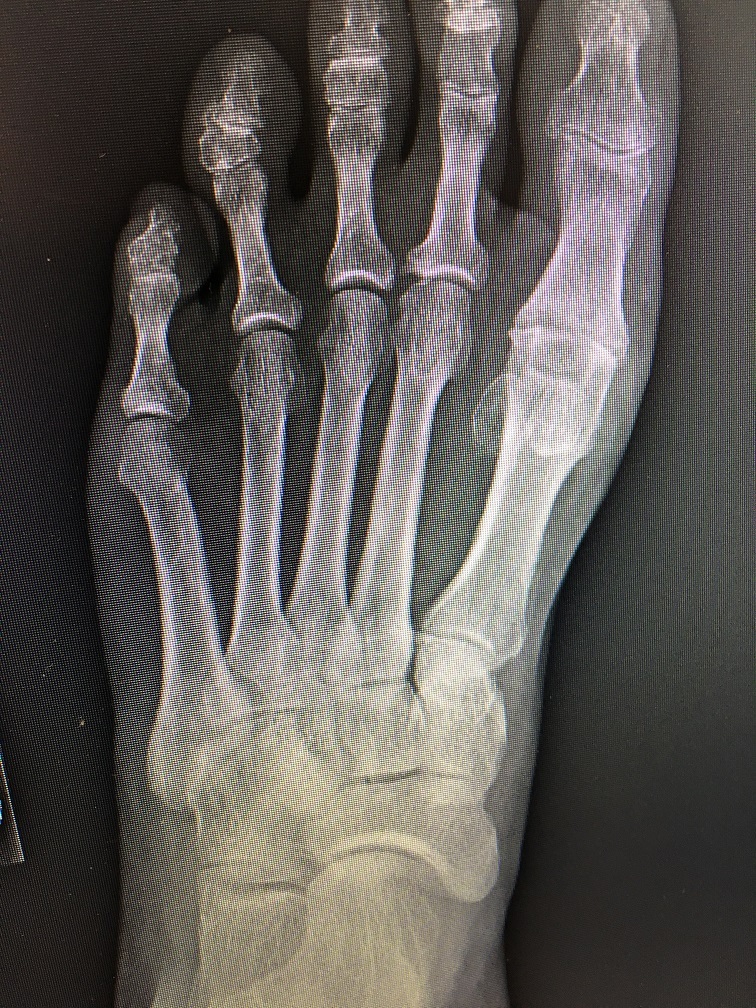 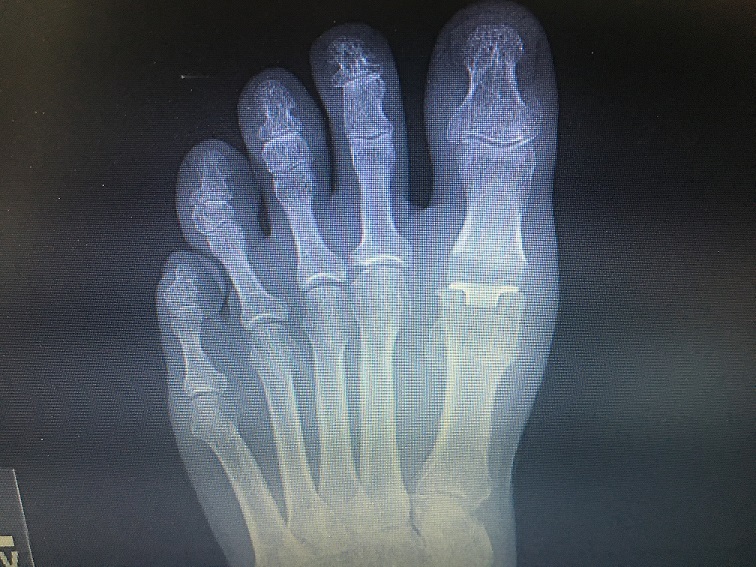 Why are Cartiva® Implants prone to failure?

The material used to make Cartiva® Implants is a very inert material made of 40% polyvinyl alcohol and 0.9% saline.  The technique is for placement of the implant reliable and easily repeated.  And in each case where I removed a Cartiva® Implant, the implant was intact with no evidence of implant wear.

My personal use of Cartiva® Implants leads me to think that there are four fundamental reasons for implant failure.  Is it surgeon error?  No.  Patient selection?  Not in the least.  Each of the reasons for failure stems directly from the design of the implant and how the design leads to impaction of the implant into soft bone.

metatarsal which consists of a base, body, and head.  Each of these areas of bone varies in density and firmness.  Immediately below the cartilage on both the head and the base is a very hard layer of subchondral bone.  The majority of the head and base are made of softer metaphyseal bone.  The body is made of very hard diaphyseal bone.  Each of these types of bone provides different physiological and mechanical functions for our bodies.  Long bones like the 1st metatarsal act as a reservoir for vitamins and minerals and act to produce red blood cells from their marrow.  Additional and more specific functions of the 1st metatarsal based on the physiological type of bone include:

The four reasons Cartiva® Implants are prone to impaction failure

The Cartiva® Implant is made of a remarkably inert substance that shows very little reactivity in the body.  But the implant is very smooth on all surfaces creating a functional flaw in the design.  In the paper cited above by Rahyussalim, he discusses the need for irregularity of the implant surface when he says:

“The greater the surface microtopography, the larger the surface area for fibrinogen adsorption, which will lead to enhanced platelet adhesion and activation. In an in vitro study, it is shown that this could elicit osteogenic reactions. The more complex the implant surface, the more preferable the environment for fibrin attachment, thus establishing a temporary osteoconductive matrix. These associations among the surface texture, osteoconductive matrix formation, and subsequent recruitment of osteogenic cells will influence the process of contact osteogenesis, new bone formation, and implant integration.”

Can an orthopedic implant be smooth and be successful?  Absolutely.  The Swanson Implant is smooth but relies on the construct of the implant to inhibit migration and impaction.  The shoulders of the Swanson Implant rest against a solid subchondral bone plate.  This to me, seems like an opportunity for redesign, creating a ribbed or irregular surface to resist impaction.

The subchondral plate refers to the hard bone found underlying the cartilage on both the head and the base of the 1st metatarsal.  The subchondral bone is essential in the management of load applied to the first metatarsal head.  Although the 1st metatarsal phalangeal joint (big toe joint) has always been referred to as a non-weight bearing joint (as compared to the knee or hip), significant load is applied to the head of the first metatarsal with gait.  Loss of the support of the subchondral plate with no alternative means of support (like the winged structure of the body of the Swanson Implant) places the Cartiva Implant into soft metaphyseal bone and prone to impaction failure.

Osteointegration, or ingrowth of bone into the implant is described by Rahyussalim as an essential aspect of implant stability.  Although not essential, all orthopedic implants as we’ve already described with the Swanson Implant and Arthrosurface Implant, osteointegration would seem to be an additional starting point for redesign of the Cartiva® Implant.

How much load can the Cartiva® Implant carry without mechanical failure?  We’ve cited long term data related to implant viability and integrity, but what’s missing from the data is a simple relationship: over the lifetime of the implant (let’s say 20 years), what is the force applied to the implant and how supportive is the metaphyseal bone?  This to me is the key design failure in that the supporting bone is too weak to provide meaningful, long term support to resist the load applied to the implant.  It’s a bit like pouring the foundation for a house in sand.

I’m a big fan of Wright Medical Inc.  Wright has helped me in many ways over my career. My Wright Medical representative has been present for these Cartiva® Implant cases and has witnessed firsthand the surgical failure of this implant.  I’ve shared these images and blog post with my Wright rep and hope this conversation can be the impetus for change, improvement in patient outcomes and ultimately a better way to perform implant arthroplasty of the 1st metatarsal phalangeal joint.

Turf Toe Plates - Flat Glass Fiber are thin enough to fit into most shoes and stiff enough to limit the range of motion of the big toe joint. This rigid insole treats turf toe, hallux limitus, and hallux rigidus. Six sizes. Sold as a pair. By Myfootshop.com. 1 pair/pkg. **Product is being discontinued**
As low as $77.31!
Leave your comment
Blog search
Categories
Blog archive
Popular blog tags